Save 5 minutes a day by using ASAP Utilities to quickly fix the numbers that Excel may not recognize.

"Easily make Excel recognize the numbers in your selection"

Sometimes Excel fails to recognize numbers properly, which causes unexpected results when you sort, filter, or use formulas.

For example, when you import a file that was created in another program, such as an accounting package, downloaded from a mainframe or copied from a website, then Excel may fail to recognize the numbers.

You sometimes may experience that:

But this is easy to fix. Just select the cells and use:
ASAP Utilities » Numbers & Dates » Convert unrecognized numbers (text?) to numbers 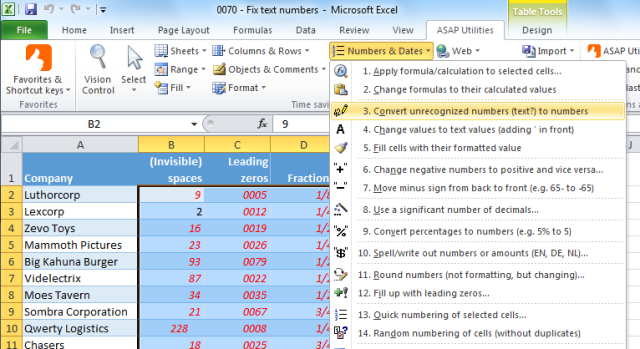 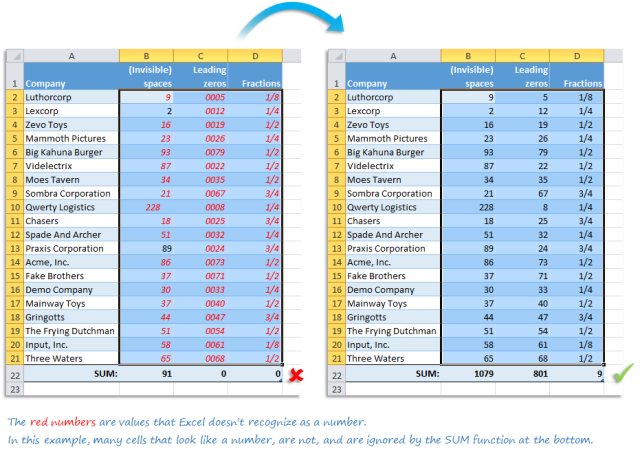 This "Convert unrecognized numbers (text?) to numbers" tool quickly fixes the numbers in your selection.
It will:

Tip: If your formulas don't give the correct result or don't calculate, then in addition to fixing the numbers, you may also want to verify that the calculation of your workbook is set to Automatic (or press F9 to calculate when calculation is set to Manual):

ASAP Utilities compared to Excel's built in "Convert to number" 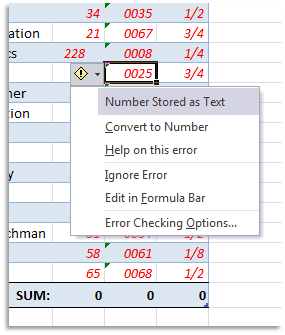 Excel (2002+) has built in "Error Checking Options", which can help to detect numbers stored as text and help sometimes to fix them. Numbers that are formatted as text are left-aligned instead of right-aligned in the cell, and are often marked with an error indicator.

If the cells in which numbers are displayed as text contain an error indicator in the upper-left corner (a small green triangle), you can select that cell and then click the error button next to the cell. Then you can choose "Convert to Number" on the pop-up menu.

While this is a handy tool, it doesn't always detect all numbers that are stored as text properly and you cannot choose your own range to run Microsoft Excel's built-in "Convert to Number" tool on.

When compared to Excel's built-in solution, these are the benefits of ASAP Utilities:

We find that this tool is often easier, quicker and also more reliable than Microsoft's advised and built-in methods (text to number/paste special workaround, or the text to columns workaround).
And to increase your productivity you can assign your own shortcut to this tool.

Hello,
I just downloaded your software package, ASAP. I’m trying to download the images of the spreadsheet and cannot find how way to do it. Could you please send me some instructions how I can do this. I’m 84 years old and I am a visual person, I can see how it works and I can figure out how to use the software.

Thank you in advance.

Thank you for your feedback.
My apologies for the delayed reply. You comment got caught in the SPAM filter.
I'm not sure what you mean with "download the images of the spreadsheet", but perhaps the following can help you:

# User Guide
The PDF User Guide will show you what you can do with ASAP Utilities. It gives a description of all the utilities available:
https://www.asap-utilities.com/documentation-user-guide.php

If you need additional information then please let me know.